For many years, I’ve been attending the Sundance Film Festival.  It is like my personal Super Bowl or Fourth of July!  There are so many things about Sundance that I love.  First off, I love film.  I think it is such a powerful way to evoke emotion and take you places you’d never be.  For the same reason, I love reading when I can get the time to do it.  It’s so fun to dress up just a bit, pick your tickets, be surrounded by other movie loving folk, grab a yummy bite to eat, possibly run into a favorite movie star and make fun memories.  The films there are always send me into a place of deep thought and reflection on my feelings about the different films I see. 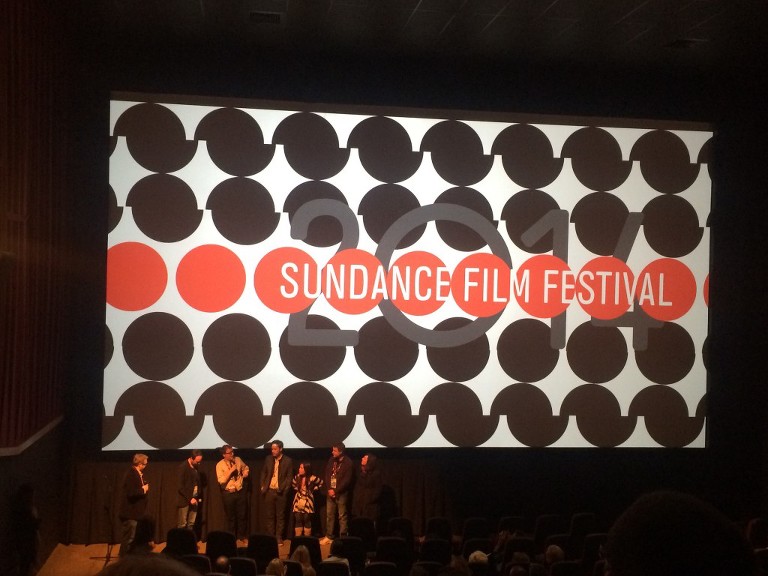 So far, there is only one thing missing from Sundance; the ability to bring my family and show them a good time too!  A lot of the movies are definitely way over their heads, and not children friendly.  Let’s face it, that’s not always a bad thing. It’s nice to get away for a minute and watch something other than a show that practices counting and colors, if only for a day.  But whenever I return from a Sundance film, my kids ask, “Was it fun?” “What did you do there?” “What did you see?”.  That’s why when I received an email from Jason, a guy I worked with on the 2013 Thanksgiving Point Gala, and he informed me that he had free tickets to the first ever “Family Film Sundance Festival”, I was ecstatic! He is part of the “Tumbleweeds Family Film Festival”.

We dressed yesterday in our “Sundance Best” and prepared for our adventure.  It took a bit to explain to the kids, that at Sundance, boots, scarves, hats and cute leggings, are dressing up!  It is freezing there, and it’s important that you are both warm and cute.  Besides, you never know when your picture will be taken.  I was kidding, of course, but it was a good motivator to get them up in the morning and out the door.  Even with great intentions, we still left too late for comfort.  I’ve practiced that skill for seventeen years, and I still struggle sometimes.  We FLEW up the canyon, past Sundance and into Park City, where most of the movies are showing.  It’s a good thing Jon has driven this road hundreds of times, because otherwise, I would have been scared to death.  Starting a movie on time at Sundance, is just as important as starting a sports event on time.  They are serious about their craft.

We pulled up just in time, and walked into the theatre.  Sundance films are held in little old theaters scattered everywhere, and you have to find each movie house, like a treasure hunt.  We rushed inside, and they greeted us with our tickets and . Badges that Jason had reserved for us.  We felt like rock stars as they took us back, into the theatre to be seated.  I was taken by surprise as bulbs lit up the room and huge cameras were in our faces, quickly snapping pictures as we ushered our children to their seats.  The kids kept looking at me and laughing, as if I knew this would happen – which of course, I didn’t.  I can’t imagine having my life always like this, with people following me around and stealing images of my family, only to critique how my children and I were dressed, or how much weight I had gained. 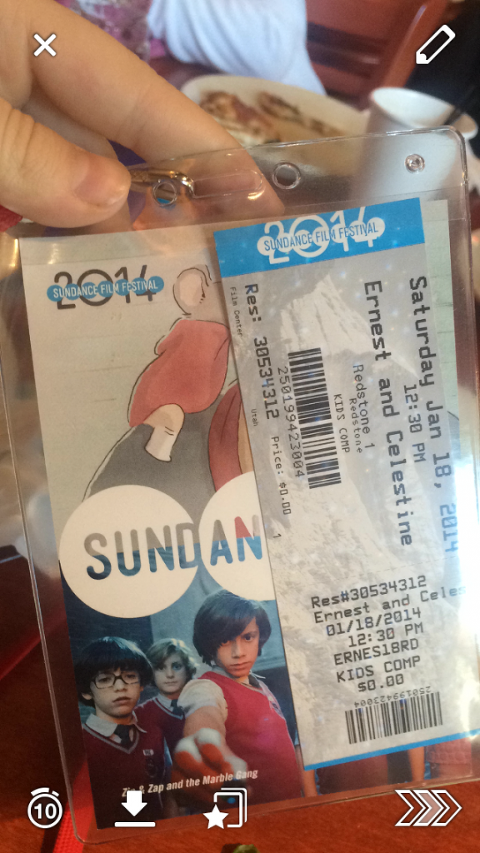 We found our seats and settled in to what quickly became one of my favorite children’s films ever.  Ernest and Celestine was the name of the movie, and boy was it a treat!  It was originally a French film that had been made from a book series, written a long time ago.  They said it hasn’t been popular here in the U.S., but that they translated it and were chosen to show it for Sundance.  Of course, I won’t go into detail about the movie, in case you ever get the chance to see it, but the basic storyline is about a mouse, Celestine who is an artist and a dreamer. When she nearly ends up as breakfast for a bear named Ernest, the two form an unlikely bond that is quickly challenged by their respective communities.  I really enjoyed many things about it. 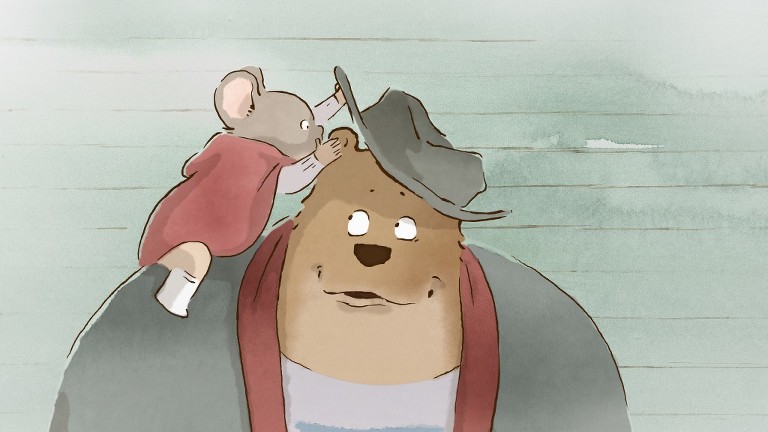 I loved the characters in the movie.  They did such a great job with the character development, and pulling me into the storyline.  It kind of had the same feel as “Little Bear” in a way.  It’s completely different, and I hope I don’t ruin it by comparison, but I just mean that you can tell when movies are made from books, and it is the same for this children’s movie.  The writing was smart, and and drawings were darling.  The producer was there answering questions, and he said that it takes twelve hand drawn pictures to make ONE second of film, and this was a full length film – which is why it took five years to complete.  It was funny, touching, interesting and even had a morale to the show – which hardly happens anymore in movies or cartoons. 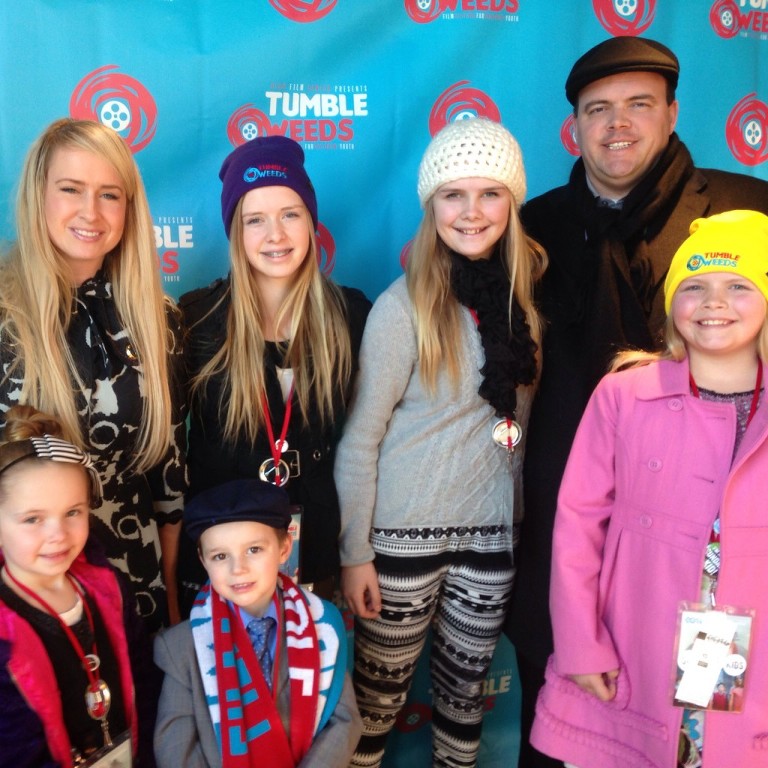 Afterward, we went across the street to Red Rock Pizza, and they fed us hot chocolate, salad, and pizza.  It was SO yummy!  The swag was so fun for the kids, and they took our picture – and also a horrible one for us on Jon’s phone.  I hope this isn’t the first – and last for Sundance.  I hope they continue catering to families.  We have such an audience for it, especially here in Utah.  I loved that it brings value to all things artistic, and that hopefully, it will continue.

5 Reasons Why Play Strengthens Family & a Give Away!