Amy Robach: Motherhood, Work life, and her Battle with Cancer

Motherhood. It is a work of art, and a as many of us know, it if filled with the longest hours, the most thrilling peaks, and the highest rewards. I call it a “balancing act” because none of us can ever really rest from it, it is movement of time and space, a reshuffling of priorities and finding what best fulfills our families and self best. There is no “perfect balance” because we as mothers are never standing still in one moment of time. In every interview I’ve ever done with mothers a common theme has always been that you cannot give everything your all. There is always give and take, ebbs and flows, and a harmony that comes when you allow yourself to find that harmony rather than seeking an unattainable perceived perfection. 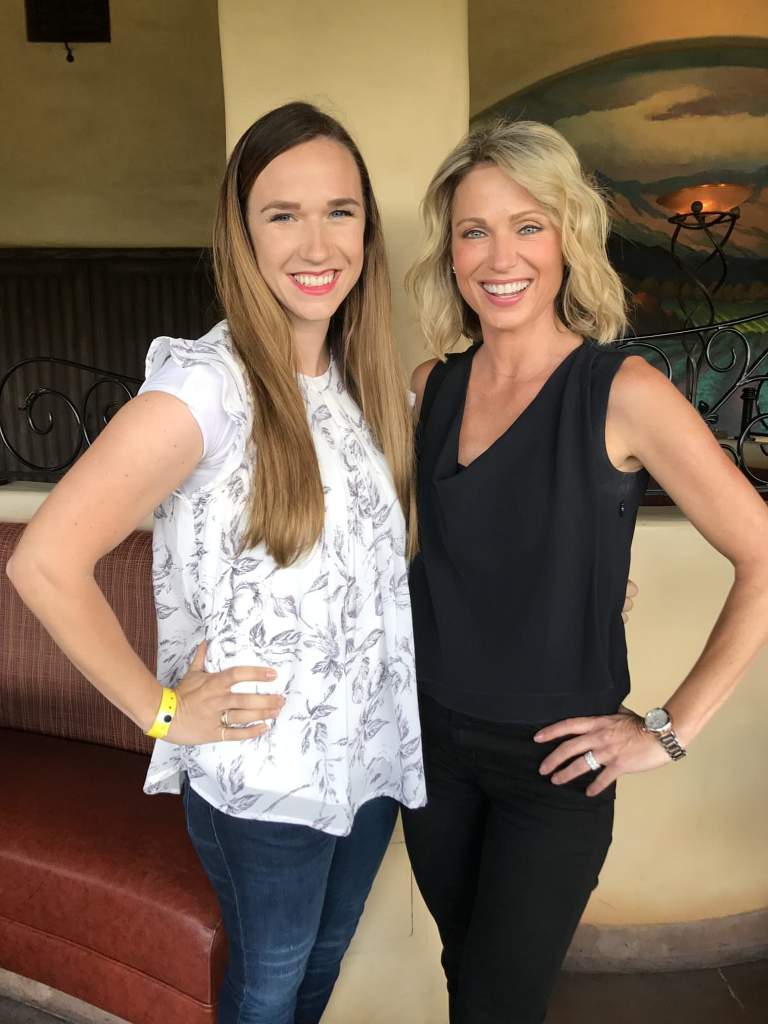 Recently my family and I took a magical trip to Disneyland and while it was filled with the Disney enchantment I cannot get enough of, it was also filled with surprises that have touched my life in a forever sort of way. One of those ways was meeting Amy Robach.  I had the opportunity to sit down with her to learn about her life lessons of battling cancer, finding a new healthy approach to life through the Keto diet, and taking time for herself to be able to support and love those around her. I hope to portray what I learned as eloquently as I can because she truly inspired me.

Amy Robach is a stunningly beautiful woman who reports for Good Morning America. I wasn’t familiar with her story until meeting her and was enthralled by how hard working and caring she is. When she had just turned 40 she was asked to do a special assignment of receiving a mammogram while in Times Square. Initially she balked at the idea as it is so personal and seemingly unnecessary at her young age, but decided for the purposes of having an impact of the importance of every woman receiving a mammogram for early detection she agreed to do it for the greater good.

It came as the biggest shock when she learned that she indeed had cancer, and it had spread to her lymph nodes which placed her in stage four cancer. It was necessary for her to receive a double mastectomy and undergo serious chemo therapy. She said, “There were moments of darkness, crying in the shower. Always thinking about it, and the worry of wondering when it will come back.” She said that she was able to channel the fear by taking those moments and think of them like a pinch and remember that we have right now and today is a gift. She has changed the way she lives, doesn’t react as negatively to situations, and has adopted the theory to always listen more. Spend time with friends and family differently. Enjoy your life even with a “noose hanging over you,” live and live with joy.

Because Amy is such a “go and do” type of person she had a natural sense of resistance to allowing others to help her. I think as women we oftentimes try to “do it all” because we feel that we can. I know that for me, when I have that mentality something suffers, and most often it is my well being and overall wellness. When Amy was asked about her experience of battling cancer and how her family/friends helped her she said, “It is so different when it happens to you. When you’re thrust into a situation of exhaustion after rounds of chemo, I insisted that I could keep up with the same level of what I had been doing before. I had to accept that my friends and family offering to help was love and that I need to accept it.  When I became changed my perspective and realized I was accepting their love and charity, I was able to see it for what it was. It was not pity, it was love.”

It came as the biggest surprise when Robin Roberts showed up on her first day of chemo treatment waiting in the waiting room of her doctor’s office and said, “I heard you’re going to be sitting in my chair again. I’m going to walk you down that hallway. That is where I sat and that is where my mom sat. You’ve got this.” She and Robin were co-workers but hadn’t had the chance to get to know each other well because Amy was literally the “fill in” while Robin was battling her own battle with Cancer. Amy was so buoyed up by Robin lending her courage and strength that she could do this even though she felt so alone and afraid. Robin then left to hop on the plane to go see the Pope. It bonded them forever.

Amy says that she became a survivor the day she started chemo therapy. Social media made the difference for her knowing she could share and they were supporting her. She says there are many disagreements of what the message of great cancer should be. It was also shocking to her to see the hateful things that people would say to her on Twitter. Saying that she was giving false hope by sharing her story. When it came down to it, Amy knew that she needed to share her truth no matter what others perceived because she believed in the process and early detection. She says that story she was assigned to get the mammogram in Times Square literally saved her life and for that she is forever grateful.

You may have noticed that I have been sharing “Keto” friendly diets on our blog recently. What is the Keto diet anyway? Essentially it is a diet of high (quality) fat, moderate protein, and no to very little sugars/carbs. The concept is that our bodies are primarily used to burning sugars/carbohydrates for fuel, but when you feed yourself high fat/protein you will have better overall health if you train your body to burn protein and fat for your energy rather than short lived carbohydrate bursts. There is soooo much more to it, and I won’t get into it here, but you can read more about it here.

Amy adopted this diet recently to help aid her defense against cancer. She is currently in remission and has graciously accepted the challenge of putting her health as a priority. Being introduced to the Keto diet/lifestyle is particularly beneficial for her body as cancer cells literally feed off of sugar. Since beginning this diet she says she is living her best life and lost 11 lbs within the first couple of months without the intention of losing weight. She says her mind is clearer than its ever been and she is passionately talking about it with all of her family and friends. I laughed as we talked about this because my husband and I talk about the Keto diet and its benefits all of the time. My husband lost 17 pounds in the first couple of weeks, which is hard to believe!  Here our our 2 favorite recipes – 1) Keto Blueberry Muffins and 2) Keto Pizza Crust

While adopting this new diet she is now also working out 5-6 times a week. Where working out used to seem like something “she had to do” she now craves it and anticipates the joy it brings.

Seeking the balance of Family and Work.

I was curious about Amy as a mother and a wife. She is undoubtedly successful in the workplace, and she is so wonderfully poised and yet warm and relatable. I wanted to hear what her home life was like. I asked her about making time for her husband and her children and how she balances the attention they need with the time she allows for herself and her job. She said, “I’ll admit that in the beginning I was married to my job. I didn’t put a lot of time into my first marriage. I was married young, and hopped into it not realizing I wasn’t really in love. In my marriage now I was able to discover what real love really feels like. We take time to be “just us” through travel, time during the week, and even spent some alone time for a couple weeks while our kids were away at summer camp.”

Amy’s tips for what matter’s most.

Make dates with your husband and your kids.

I am right in line with Amy’s approach of collecting memories and not things. Rather than spending money on gifts for Christmas or birthdays, she seeks for ways to make memories with her kids. She plans special one on one dates with her children to do things that they enjoy to do together. She gave the example of taking a trip to Europe with her daughter as a gift for Christmas. She said that this is something that in the past she would have seen as too lavish or expensive. Now she knows that life is to be savored and explored and is willing to put money into moments that will last in the memories of her family forever.

I am so grateful that I was able to meet Amy. If I could sum up everything that she said to us this would be it:

*Wake up early to get time for yourself as a Mom EVERY single day.

*Invest in your relationships being slow to anger, and listen a lot more.

*Treat your body well no matter what age you are. Get healthy with your friends/family. It is always so much more fun when you have a buddy.

*Accept service from those around you even when you feel like you can do it all. It is love, not pity.

*Accept the strength and love from. those around you.

*Go get that mammogram.

Thanks Amy, it was such a gift to meet you.

You can read more about Amy and her battle with cancer in her book, Better. 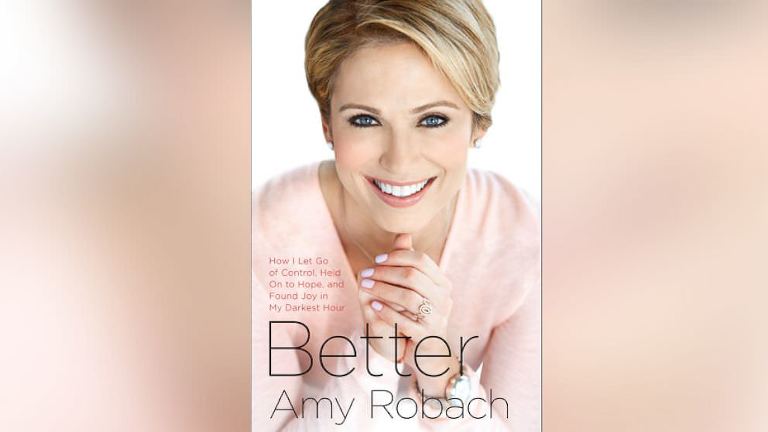 0 comments
« Fall Fun in Ocala/Marion County, Florida
50 Activities To DO with Your Family This Weekend »