How to make a piñata

When my oldest son turned four I threw him his first birthday party with friends. Of course he chose the hardest theme for a birthday party ever–blimps. I had to get pretty creative for that party because nobody sells blimp party decorations. Nobody.

I made him a blimp piñata because I was having a hard time coming up with things to do at a blimp party. Little did I know that I would be starting a birthday tradition in my home. I now make a piñata for every birthday party I throw for my kids. Making a piñata is time consuming, but not too difficult, and it doesn’t cost a lot of money. The costly part is the candy, but with some planning it can be cheap.

My sons’ birthdays are right after Easter and my daughter’s is a few weeks after Halloween, so I plan an early morning trip to Walmart the day after those holidays and stock up on candy that is 50% off. Most of it isn’t even Easter or Halloween related. You can get the huge mixed bags of candy bars for less than $4 or taffy, suckers, and tootsie rolls for even cheaper.

Since I’ve made my fair share of piñatas, I thought I’d share a tutorial on how to make your own.

A word of warning: piñatas take at least three days to make, so if you are making one for a party plan accordingly. 🙂

First, cover your table with a plastic cover or newspaper. Making piñatas can get pretty messy. Inflate a balloon and then take a box and cut a hole in it to hold your balloon. You can also use a large bowl to hold your balloon, I just prefer this method.

Mix together 2 cups of flour and 1 cup of water.

Tear your newspaper into 1-2 inch strips.

Soak a strip of newspaper into your flour mixture, wipe off excess paste with your fingers and then smooth it on the balloon.

I like to make an X with my newspaper to sturdy my balloon and keep it standing. 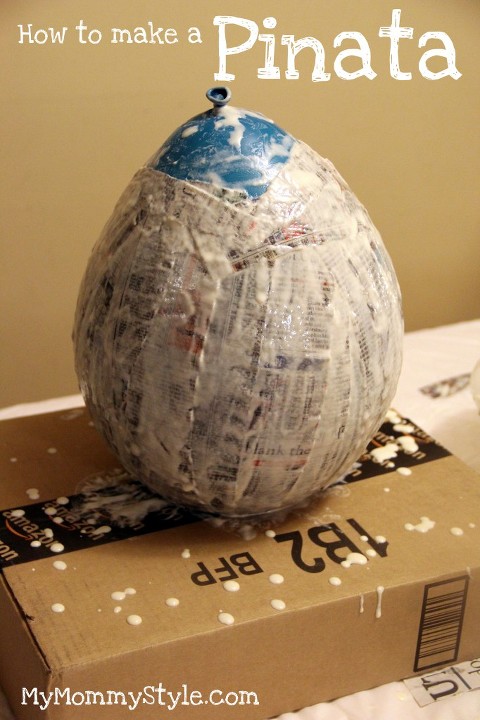 Another tip is to use a bright balloon because when you are done with your first layer you will be able to easily see the spots you missed covering.

Let your balloon dry overnight. With all the added pressure to the balloon it is normal for it to be poking out of the opening at the top like that.

When your first layer is completely dry you are ready to add layer #2. Do the same thing as the first layer, but make sure these strips of newspaper go the opposite direction, this will make your piñata stronger.

Let your second layer dry overnight and then add one more layer the next day. Three layers makes a pretty strong piñata for most 3-6 year olds. It gives them each a turn or two to hit it, but it isn’t impossible to break. You could stop with two layers and still have a pretty strong piñata. You can decide how strong you want your piñata, it all depends on the ages of the kids and how many there are going to be at the party.

Pop you balloon and take it out of the piñata and then if you want you can add candy to your pinata at this point and then cover it with more newspaper strips before decorating. I like to add my candy right before so I never cover the hole on mine, as long as you hang your pinata with the hole at the top you won’t have a problem with candy falling out. It probably looks better completely covered, but I’m just not that ambitious, I guess.

Also, traditional piñatas are made with crepe paper, but I always paint mine. It is so much faster.

Here is the finished blimp pinata I made for my son’s birthday:

The fins and gondola on the blimp are made from candy boxes that I painted and taped on. 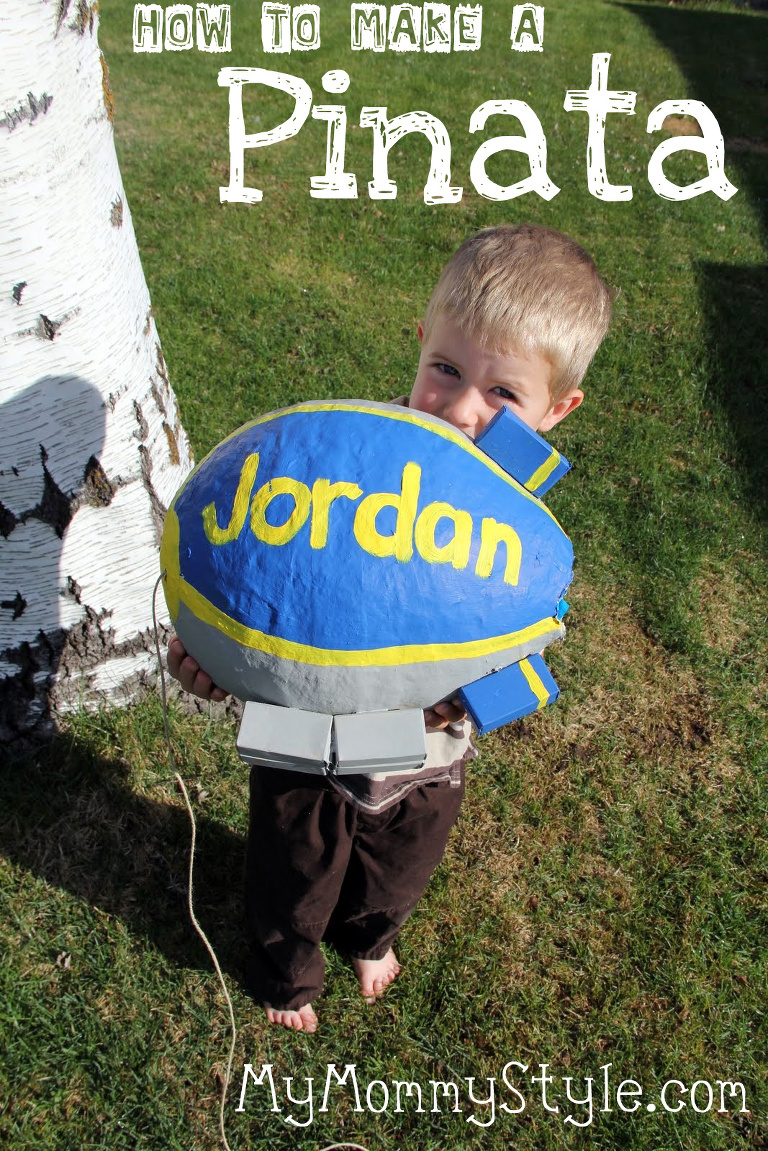 I don’t have an up close picture of the Angry Bird pinata I made, but it is the round black bird on the table.

I used a punching balloon for that pinata to make it large and round. Then taped an Angry Bird face on it that I printed from my computer.

When I hang my pinatas I make four holes in the top by the hole and add rope to tie to a tree.

After I hung up the pinata this way I realized how off I was when I painted the yellow circle on the front of the pinata. 🙂

We love piñatas at our house! Have fun!