Hey everyone, it’s Melissa. My husband, Benji, just beat Candy Crush after a long 8 month battle with the game. I think if I knew how addicted he would get to Candy Crush I would have advised him to not start playing. I don’t think he would have listened though. And besides, I forced him to write down all of the juicy details on how he beat the game to help you beat it too, so I guess in the end it was worth it. Happy Crushing! 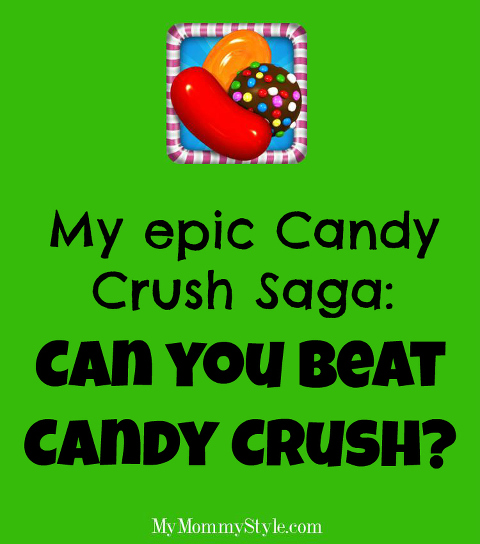 There I was. One move left, two jellies to clear. I’d come so far.

The journey began last summer when I downloaded Candy Crush on my droid, but was too proud to let any of my friends know I gave in to the temptation! Anytime I was prompted to save my progress with facebook, I refused, so when my phone completely died after reaching level 120, I had no choice but to start over from the beginning.

Having learned my lesson, this time I would sync the game from time to time, but I was still too stubborn to become an annoying social Candy Crusher, so rather than ask for help getting in the boat to advance from episode to episode, I would simply play quests[link to Paul’s post]. I also made it my personal goal to never give nor receive any help – no extra lives, no special moves, etc. Honestly I don’t know what all the advantages are you can get from your friends because I ignored everything. As far as I was concerned, Facebook was only there to save my progress in case of another device-killing catastrophe.

Somewhere in the mid-150’s I began wondering how long this Candy Crush journey was going to last. It was then that I realized, they are ALWAYS making new levels. About this time I saw that Marie Osmond had posted on twitter that she had reached this milestone. (Note- I don’t follow Marie on Twitter. Some comedian retweeted it into my timeline, I promise.) 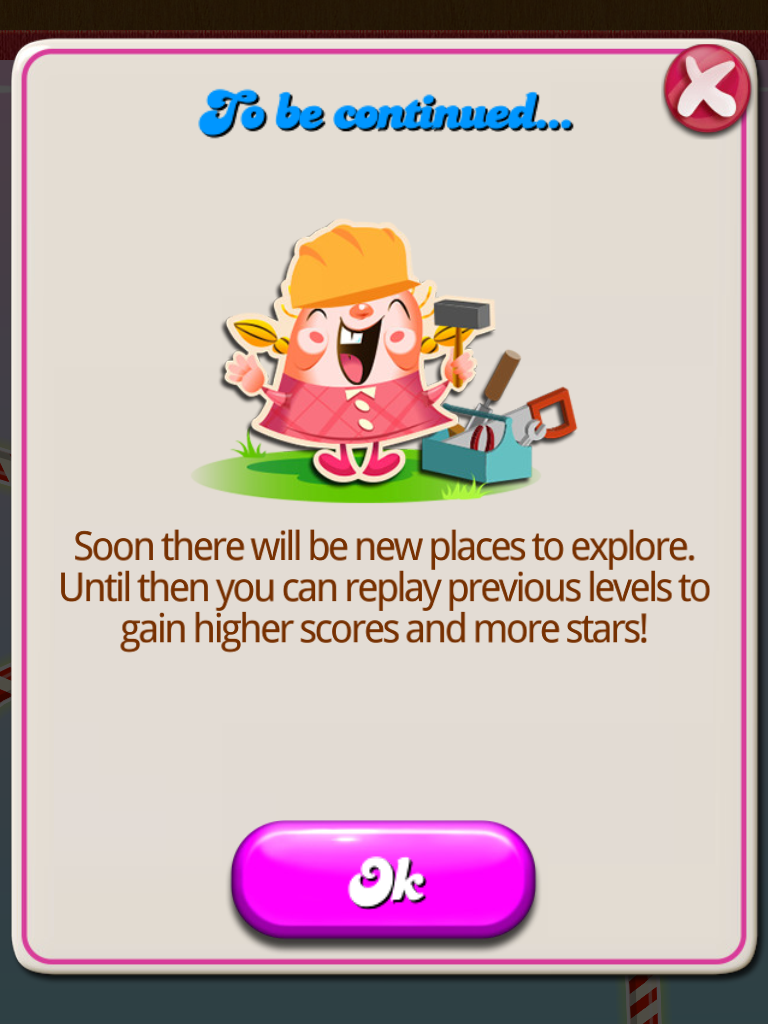 So I continued on my journey of crushing candies and having a great time all through the summer and fall. And it was fun. So I kept going. But at some point it stopped being fun and turned into more of an obsession. Rather than crushing for the love of the game, I began looking forward to the time I caught up to all the released levels so I could just be done with it! In fact, my ONE over-arching New Year’s Resolution this year was to finish all available Candy Crush levels, and then to delete the app and walk away from the game forever. It was me vs. the candy. Just like at work.

So there I was. Level 530. One move left. Two jellies to clear. I had a bomb available, and it was next to both a green and a blue candy, which happened to be the two candies occupying the jelly-filled squares. I took a moment to study the situation. I knew it would involve a little bit of luck, but I also knew how I played my final move could increase my chances of victory. The blue candy in the jelly was surrounded by all different colors. The green one, however, had another green candy immediately below it, as well as a blue above it, but I couldn’t see any higher because that blue candy was at the top of the column. I realized that if I swiped the color bomb with blue, not only would the blue jelly be cleared, but that I would have a 20% chance of having a green candy drop into the other column and give me the three greens in a row needed to clear both jellies. Because I didn’t realize the significance of the moment, I didn’t screenshot it, so here’s my artistic re-creation below: 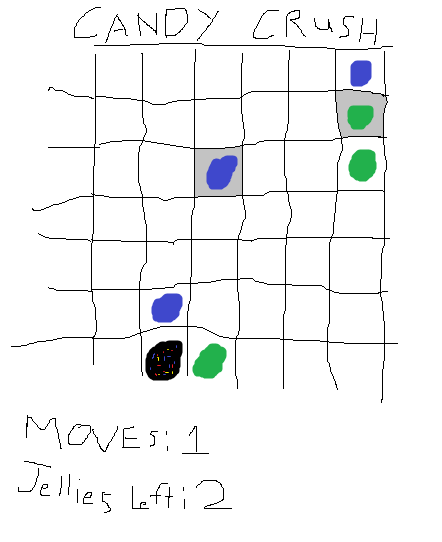 Then it happened. My skill mingled with just enough luck to bring down a green candy, allowing me to clear the two jellies in what would be not only my final move of this board, but of the game, and of my life.

Like Michael Jordan holding his hand in the air an extra second after he made the 1998 Championship-winning jumpshot, time seemed to slow down as I held the iPad and witnessed the jellies disappear, solidifying my place as a candy crush champion. Naturally, I stood triumphantly, and perhaps felt the slightest disappointment in the fact that there weren’t thousands upon thousands of joyful fans acknowledging my accolades. Nope, I was all alone in the room, my imagination solely responsible for the glorious soundtrack.

I sat back down, and I moved on.

I have decided to share some of my Candy Crush journey with you, including advice, cheats, and lessons learned along the way. I’m obviously new to the mommy blogging scene, so I’d love to hear what you think. Have you been sucked in to Candy Crush yet? Are you determined to finish the game or did you throw in the towel ages ago?

Check out my other awesome Candy Crush posts:

How I would Improve Candy Crush

1 comment
« Life Lessons Learned from Candy Crush
Being human? How embarrassing: A guide to Aging Gracefully »