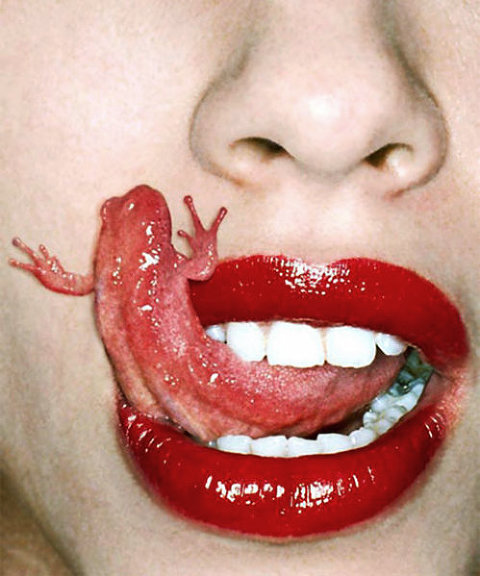 I’d like to start today’s post with a story long ago from my past.  When I was in college I went on a date with a girl…let’s call her Collie.  Collie was a nice girl, but she had one glaring flaw.  She kissed like a lizard.

I know you’re all thinking, “Okay, so she used too much tongue get over it!”  No, this was different.  Imagine the tongue of a lizard quickly shooting out and back into its mouth.  Now imagine this happening at a rate of about 50 shots per minute.  This was the method Collie decided to kiss her dates.

Don’t worry, you aren’t the only one who thinks I’m lying.  After my date I had the same reaction from my roommates – including my younger brother who lived with me at the time.

After much discussion among our group of roommates we came to only one logical conclusion – one of my other roommates needed to kiss Collie to verify the lizardness.  We discussed it and decided it had to be my little brother.  What girl wouldn’t want to kiss brothers?

So we all set the wheels in motion.  The next morning my brother called Collie and asked her out that night.  We all worked tirelessly to clean our apartment, light scented candles, and really get the mood right.  We vacated the apartment and waited with anticipation for a call from my little bro.

Well, sure enough she kissed my brother the night after she kissed me, and sure enough the lizardness was confirmed.  Collie went onto think she was the biggest playa in the world and we, of course, had our fun with many future lizard jokes and sharing of this story countless times.

So you ask, why do I tell this story?  First, to let you ladies know if you kiss like a lizard…PLEASE STOP.  Second, because (you can ask my brother) it sucks to be sloppy seconds, even to a lizard.

So let’s get to the action.  Last week’s episode left off when Brooks crushed Des’s heart and went home on his own accord.

Tonight’s episode starts with a sit-down with Chris Harrison, “If Brooks was never here, do you think you would be in love with your other two guys?”  After a long pause Des responds, “I don’t know.”  Des questions whether she wants to stay or go home, but decides to move on to the rose ceremony.

Chris Harrison brings the guys in and says, “As you can see there’s something missing here.  It’s not my place to tell you, so here’s Des.”

Des starts with the guys, “from day one I’ve treated each relationship individually.  I’ve got two roses here and as I learned, love is a two way street.  So please when I offer you this rose please let me know (sobbing)…please let me know.”

The guys are all for second place and each accept the rose.  “I’m so in love with this girl.  I’ll never leave Des,” Drew says somberly.

Harrison then fields some totally impromptu questions from the audience.  Most of the audience shares in Des’s dreamland and thinks Brooks is coming back.

Time for some dates!  Des starts with Drew.  She shares with Bachelorette Nation,“I really want to see how it goes and if I can love Drew like I loved Brooks.”  RED ALERT!

The date starts real awkward, “How was your day yesterday?”  Drew asks causally.  How the freak do you think it was!  He continues in his naïve ways and toasts to “Being madly in love.”  Des now knows something is amiss and breaks down.  “I would be (sobbing) so lucky to have you in my life, but I don’t see us being together if I can’t give 100% to you.”

“I didn’t see this happening,” Drew says (that’s an understatement).   Can you tell I’m bitter my pick didn’t win???

Drew shows he’s a class act and consoles Des (when she’s really the one supposed to console him).  He can tell there’s something really wrong with her.  Drew gives her one last embrace and says, “I hope you find your happiness.”

Time for Chris’s downfall.  He starts their date with a nice, “Welcome!”  This puzzles Des, because he’s the one that arrived, and totally takes her mind off of Brooks.  “When Chris walked up I had a much different feeling than when Drew walked up,” Des shares with Bachelor Nation.

They share a long catamaran ride with several Titanic-esque poses.  They also share a dive into the ocean which helps Des bring back those feelings of love…or those feelings that Chris is the only guy left.

“I love how every time we’ve hung out together, we’ve always taken a step forward and never a step back,” Chris says.  Des stops daydreaming about Brooks and realizes Chris is making a lot of sense.  “Hey that’s true!” Des responds.

Chris then has to ask Des to meet her family (is this feeling really forced to anyone else??), which prompts her to remember she’s on a reality show.  “The fact that Chris asked to meet my family shows he really cares,” Des says dazedly.

Des then breaks down and says to the camera, “In all my relationships, I’ve always loved the other person more than they’ve loved me (she really breaks down at this point – it seems like she’s really talking to Brooks at this point).  It’s so amazing to have someone who shows me love.”  It’s hard not to notice how different Des acts around Brooks and the other guys at this point.

Chris now gets to meet the family.  Time for some hard hitting questions from Playboy (Des’s brother), “You’re not a jealous guy are you?  What about the other guy that’s left, do you like him?  How would you feel if you weren’t the one chosen?”  I really do love this guy.  He starts to get more and more obnoxious which prompts Des’s father to bail Chris out and pull him aside.  Chris asks for Des’s hand in marriage which is given by her father.

Des sends Chris off and has a one-on-one with the Playboy.  “When I saw you in LA you seemed to be leaning toward Brooks.  Now that ship has sailed, do you think you are 100% in love with Chris?”  Des doesn’t have a concrete answer and really needs to do some soul searching.

So at this point of the show the only question I have is, is the only reason Chris is still around for Neil Lane’s cameo?  Chris sits down with Neil and picks out a huge rock and wonders to himself, “if Drew is also picking out a ring and ready to propose to Des?”  No way bro, you’re the only token Bachelor contestant left.

Next Chris puts on his best skinny tie and Des puts on her best formal dress for either the greatest breakup or the shortest engagement in Bachelorette history.  Chris meets Des at the proposal site and pours out his soul to Des.  “Chris doesn’t know about my feelings for Brooks,” Des tells Bachelorette Nation.

Chris starts telling Des how much he loves her and attempts to get on one knee, but is stopped by Des.  He obviously thinks that means he’s done, but Des goes onto explain that Drew was sent home and Chris was the only one to meet Des’s family.

“I felt that I was so blinded by my feelings for Brooks, that I didn’t see what I had in front of me.  I love you so much,” Des tells Chris.

Okay, so this is getting really WEIRD now!  Des is sobbing and I’m not sure if it’s because she’s still broken up about Brooks or because she’s happy.  I tend to believe it’s because of Brooks because the sobbing starts when she tells Chris what a hard time she had getting over Brooks.  Des luckily doesn’t mistake Chris for Brooks and says, “Chris will you accept my final rose?”

Chris and Des survive “After the Final Rose” which includes an appearance from Brooks.  Chris Harrison shows his hard hitting journalism and doesn’t even ask Des or Brooks if they are still in love with each other.  Since I lost my first prediction of this season with the downfall of Drew, I’m proposing another.  How long do you give Chris and Des?  I give them one month tops!  After Chris sees the footage and has a few family parties with the Playboy, I think there’s no coming back and he’ll realize he really was sloppy seconds.

So feel free to chime in with your predictions.  How long do you think they’ll last?  How do you rate this season compared to past seasons?  Let me know whether you agree or disagree with what I saw while watching, occasionally in the background.

0 comments
« Things that are finally helping me lose the weight & mix tape
How to make perfect, fluffy scrambled eggs »