I know when you woke up last Tuesday morning you went straight to www.thesolsticesisters.com (aka www.mymommystyle.com) and found nothing.  “Where the FREAK is my bachelorette recap post!”

I have to apologize profusely for not posting last week, but I was away for good reason.  I’ve decided that I owe it to my 256 readers (that may be exaggerated) to really embrace the Bachelorette experience…so I attended a Bachelorette Reality Camp.  No, not because this season is so boring that I had to pay 3 easy payments of $499.99 to go to a camp to fill that entertainment void we’re all feeling.  I attended because I have been so skeptical of the feelings these reality star hopefuls feel so early, so I had to find out for myself.  Now before you all start text messaging my wife, you have to understand that I wasn’t dating anyone else or getting a heart with a “guard and protect” shield tattooed on my wrist.  I was simply doing some of those amazing things Bachelorette hopefuls do on their dates which bring about nothing but feelings of insanity and love mixed in a bottle.  THAT is the dedication I want to show to all 256 of YOU!  If you don’t believe me, here I am repelling from a 50 foot tower. 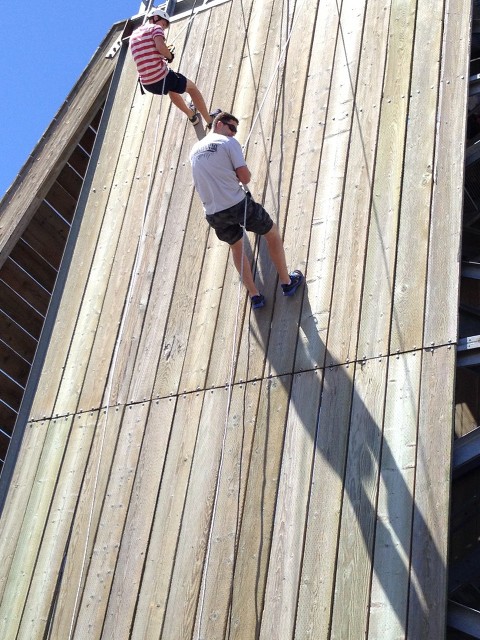 I’ve got to tell you, I’m a believer now!  I’ve never felt such strong feelings as I did for the 250 pound handle-bar mustache that assisted me down this wall.  Our trust rose to levels I’ve never experienced with another repel tower handle-bar mustache.  If I had a rose, I would have pinned it on him…NO ROSE CEREMONY NECESSARY!

Okay, okay, so maybe I was at Youth Conference and maybe that’s a picture of me during one of our activities, but I’ve gotta tell you staying with thirty 14-18 year olds under one roof is as close to the Bachelor series as you can get!  It was definitely more entertaining than most of the dates Des has been on.

As I noted in my first post, I actually do not watch the Bachelorette.  I only occasionally see what’s going on as my wife watches.  So I did not see last week’s episode, as Camille watched while I was off repelling.  This week’s recap will only be this week’s episode, so you will all be spared from another rant from me about how dating Des is like dating the female version of Ted Koppel.

So let’s get to the action!  The show starts in beautiful Barcelona.  Zack (non-abs) starts the episode by sharing a not-so-secret conversation he overheard with Bachelorette nation, “(Jersey Shore) had what he thought was a secret conversation with (Italian Stallion) where he said he hoped to be the next Bachelor so he could…(wait for it)…get into clubs and get girls”.  Isn’t Bachelorette the next best thing if you were barely edged out by Ronnie during casting for the Jersey Shore?

This revelation about Jersey is shown at the beginning of the episode simply to wet our appetites for the upcoming confrontation.  Before we get to the juicy part, it’s time for some dates!  The first date is with Drew (my pick to win).  He starts the date with a kiss and then gets serious by sharing stories about his recovered alcoholic now cancer diagnosed father.  “He’s my hero,” Drew shares, “most people don’t even know he has cancer.”  Well I guess you’ve ruined that secret…

The date moves to the dinner portion when Drew suddenly pulls Des from the dinner and runs down to a hidden alley for a make-out session.  Des dreamily remarks, “Drew is just makin’ out, but…in such a romantic way.  I wish this kiss could last forever.”  Drew steals Des’s heart and gets a rose.

Drew decides to put a halt to all his romantic momentum and share Jersey’s secret with Des (He also was pretending he was asleep and overheard the not-so-secret conversation), “If James makes it into the top 4 it will give him the exposure to become the next bachelor.” Des is shocked.  What?  People actually come on this show to get famous?  Didn’t these guys learn anything from Souldja Boy’s now #1 iTunes hit “Right Reasons”?  All I know is I would never mess with Jersey, because snitches get stitches at the Shore boyyyyy!

Time for the group date!  The guys head to the soccer field.  Des announces, “You’re going to be playing against me and my team.”  Des rolls out with some professional women soccer players, one of which I swear is the chick from The Ring – she’s got that long black hair that never reveals her face.  When she ran toward the screen with the ball I flinched big time thinking she was coming right through the screen into my living room.

The guys score the first two goals (or goooooools if you hate America), which is followed up with 10 straight goals by the ladies team and possibly one of the guys being drug down an abandoned well adjacent to the field (that movie really scares me).

At the end of the group date the guys pull Jersey aside and confront him. Kasey somberly tells James, “You said ‘If I could make the final four I am in a very good spot to become the next bachelor’”.  The Bachelor editing crew pulls their best Ryan Secrest impersonation and cuts directly to commercial.

After the break, Kasey proceeds with an elaborate story about Jersey and the Italian Stallion with tall rich women in Chicago getting into clubs.  This totally confuses me because Snookie and J-Wow are anything but tall.  Jersey completely denies the accusations and explodes in true Jersey Shore fashion, “I didn’t bring that bleep up, Mikey did…you’re putting words in my mouth…it’s guy talk!”  One of the guys even goes as far to say, “Bro this isn’t an audition for the Jersey Shore!”  That was exactly what I was thinking!

James finally gets his chance to explain himself to Des, “the girls, the boats, the clubs, that’s what Mikey said, that’s not what I said…I swear on my Dad that I didn’t say anything .”  The conversation takes a turn for the weird and Jersey channels his inner chocolate-covered-strawberries-in-bubblebath routine and turns on the water works.  He really just flat out cries!  This prompts Des to have compassion on Jersey and sleep on the decision.  On the way home from the group date James continues to cry and cry and cry…pull yourself together man, the Situation would never put up with this crap!

Meanwhile the guys are back at the loft talking trash on Jersey.  “He just totally exploded…He will wake up tomorrow morning and regret what he said,” Michael states.  Just outside the loft, Jersey wipes away the tears and dramatically throws the door open to the surprise of all the guys (who 100% expected James to be on his way home).  “Gentlemen…Good night,” James says in his best hard-core voice, which was certainly followed up with a nice bubble bath and several Matthew McConaughey movies.

Time for the one-on-one with Abs (Zack)!  Des takes Abs to an art gallery, where they decide to paint pictures of each other.  Abs reveals his portrait of Des which…AHHH IT’S THE RING GIRL AGAIN!!!  She’s not entirely flattered with his gothic impression of her, but laughs it off as an impressionistic Picasso version of her self-portrait.

Bachelorette producers know when to throw a huge curveball (which I’m totally in favor of…please give us something here) and send in a nude model for the couple to paint.  Abs’s jaw hits the floor and stays there the entire time he (yes I said he…) is modeling for the couple.  “Don’t look down, don’t look down, don’t look down,” Abs mutters to himself.  Zack decides to one-up the model and strolls out of the changing room with a robe on and reveals…Chris Harrison’s tighty-whiteys!  Hey I wondered where those things went?!?  Abs wins Des’s heart and gets a rose.

The next day Des visits the guys and takes Jersey outside for a talk.  “I talked about possible scenarios…what if I was the next Bachelor, what if I was Des’s husband?  It was totally hypothetical discussion which is 100% okay,” Jersey implores.  Des breaks down, “From what I’ve heard from the other guys it’s tough…but it’s hard because we did have a good date.”  James lays on the charm (and huge sweat marks under his pecks?) and Des keeps him until the rose ceremony.

James goes back to the loft, sits right in the middle of the guys and we go into full Jersey Shore mode.  I’m just praying for James to get crazy and throw all of the guys’ hairspray, bronzer, and mattresses onto the balcony, but all we get is the same story over and over.  “It seems like you’ve learned a lot here James,” the Lawyer (Michael’s new nickname – does anyone else feel like they’re watching Judge Judy when this guy’s talking?) says sarcastically.  “I’m done here!” James exclaims while leaving the room.  “Yes you are,” the Lawyer counters.

“Tonight’s the hardest decision I’ve ever had to make…I want to believe the guys, but when James was crying I could see his sincerity in his eyes,” Des tells Bachelor nation.

Time to hit the fast forward button, cause it’s rose ceremony time!  Des gives the final rose to the Lawyer and sends Juan Pablo, Zack (non-abs), and Jersey home.  The Lawyer fittingly states, “case closed…the people vs. James and the people have won.”  James rides off into the sunset to the delight of all the guys and most surely to his own delight because he’s definitely secured himself a spot on next season’s Bachelor Pad.

So this concludes another riveting week of the Bachelorette…  I must say, however, that this season (so far) has turned out better than I expected.  I have officially elevated this season to slightly below Ashley’s season.  I’m not quite ready to elevate it above Ashley’s season, but if the previews are any indication this season may come in 2nd to last…

Feel free to chime in with your views.  What did you think of Jersey’s exit?  Where do you rate this season in comparison to past Bachelorette seasons ?  Were you happy with the return of Chris Harrison’s tightey-whiteys?  Feel free to comment and agree or disagree with what I was watching…occasionally in the background.