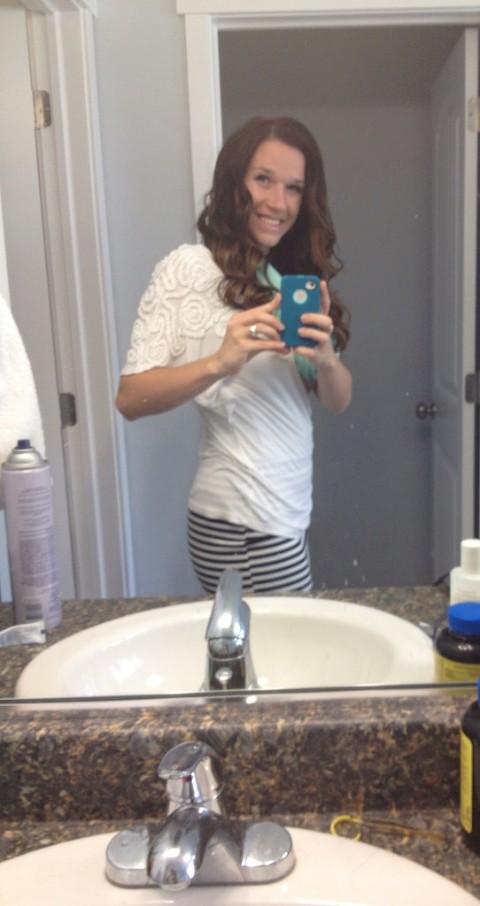 I grew up as an avid journal writer. I started when I was five and something about it really clicked with me. When I first heard about blogs and how personal people were on them I was shocked to say the least. You mean to tell me people write about the dreams they had the night before or actually write about their innermost secret feelings for the whole world to see? I had a hard time wrapping my brain around that.  A journal/diary is something private. Something you hid from your three brothers safely  under your bed. (ha ha) Something you never reveal to those you don’t know. As I have had experience with the blogging world now I have realized that blogging can do so much good and yes, some private things are okay to share and they can benefit other people. I have certainly learned from reading other’s deepest thoughts and a lot of times the blogs I like best are the raw and open blogs that come right from the heart. So that is what I intend to do today.

I am writing about something that happened three weeks ago and this something was so delicate to me that I was afraid to write it down. I should start by saying that I have miscarried twice. Once between my first and second child, and the last time was the day after Christmas this last year. They were both devastating. And while I know that 1 in 5 pregnancies ends in a miscarriage the experience is one that I will simply never forget or toss off as a statistic. Because truth be told, those babies’ were not a statistic to me. They were mine. I lost them both around the 7th week and being the type of person that I am I already knew their due date, trimester milestones, astrological signs, and weeks written on my calendar. A baby brings hope and that is why it is so devastating to lose that baby and with it some of that hope that they brought with them. Now as I write this I know that there are certainly many harder things on this planet to go through and while I can understand the heartbreak of miscarriage, I myself have never gone through infertility, a serious illness, or life threatening situation of a child’s illness/death to name a few. I consider myself very lucky and through all of it I realize that to make the decision to become a parent is the most exhilarating, life changing experience I can think you could go through; it is also extremely scary. Because once that baby is a part of you, your heart is now split into different pieces that reside in these amazing little humans that I have the privilege of raising.

It was a Tuesday and I was going to my regualr “Body Jam” class at the gym. I was so excited because I have been consistently working out and was hoping that I would be able to do so with this pregnancy more than I did with my previous two. This class is a dance type of class and there was some spinning and jumping involved. I was very aware of the “talk test” and even made sure not to do all the twists/jumps to tone it down a bit. I was feeling great! So excited that I could work out at a semi-normal speed and not feel overly winded or tired. I was going to be a “cool, fit mom” that went to the gym through my whole pregnancy. I came home later that day and was getting the kids their lunch when I was taken over by extremely sharp cramping and pain. I ran to the toilet horrified to find blood dripping down my leg and onto the toilet seat. “Please no, Please no, Please no” I prayed and I called my Mother right away to see if she could come over to help me with the kids. I am so thankful to her for being someone I can rely on and especially thankful that she retired last year. As she was on her way over I called Paul to let him know what was happening and that our doctor advised us to go to the ER right away. My mother showed up at my door to find my still sitting on the toilet with desperation and helplessness. Because that is what you feel when something like this is happening. Helpless. She leaned down to hug me and we cried together. She knew what I was feeling and what I was going through…she had two miscarriages of her own. I cleaned up a little bit and got out of the house, I had to get some fresh air as I waited for Paul to arrive.

The ER was slow even though it seemed empty. Isn’t this place supposed to be a place of action I thought as I laid in my hospital bed for what seemed like forever. They took samples of my blood, gave me an IV, and asked me to retell the story of what happened. Finally I was wheeled to the ultrasound room and I didn’t even dare look at the moniter. I was certain this was number three. In fact an hour earlier I had already logged that day as my third miscarriage into my phone. It was pure astonishment when the tech said, “You can look at the baby. There is it’s heartbeat.” “There is still a heartbeat?!?” I sobbed and could hardly believe it could be true. She said everything was measuring on time and I was filled with hope that maybe things would be okay. Back in my original waiting room the doctor came to talk to us. He asked me how I was doing and I said I was feeling better. He then went on to explain that although the baby is measuring perfectly I had a placental tear that was “rather significant” and it wasn’t looking good. My heart sank. That little baby I just saw moving inside of me is not going to make it? He did a pelvic exam and said my cervix was still closed, which was good, but that my bleeding was moderate and pretty much told me to expect the worst. He told me it was nothing I had done but at this point we would just have to wait and see. Again I felt helpless and heartbroken and was almost mad that I had that ultrasound and saw that sweet baby if I was going to be losing it within a matter of hours. It just made it so much worse to see that little person and know that its heart may not be beating for much longer. I never went in to the doctor with my other miscarriages and now knew why people choose to just stay home.

On the way home I told Paul that I would really like a blessing, through my faith I felt like this was the one thing that I could ask for. Paul was hesitant and didn’t want me to expect to be healed. I told him I certainly didn’t expect him to promise that, but knew it was the one thing I could reach for. I know that my Heavenly Father is aware of me as he is of each of us. We contacted my brother and he came home shortly. In the blessing Paul blessed me with comfort and the knowledge that the Lord is aware of me, he said a few other things and finished off with a blessing to heal. I was so surprised and when he was done I asked him why he had said that if he were so worried about saying something like that. He told me that he was impressed to say that and really felt like everything would be okay.

My Doctor called later that evening, (he is simply amazing), to check in on me and to hear what the doctor had said at the ER. After hearing the rundown of the visit and the dismal outlook of the ER doctor my doctor said that he thought everything would be fine. I thought he must be crazy! He explained to me that 20% of his patients have placental tears and most of the time they turn out to be just fine. He cautioned me to take it easy as I could for the first 48-72 hours and if the bleeding got worse to let him know, but finished the conversation quite sure that he would be seeing me in a couple of weeks for my regular check up. Once again I was thrown at was a positive outlook he had on my baby’s survival.

I stayed on bed rest for about 5 days; the first 3 days moving as little as possible. To my astonishment things did get better. It has been three weeks now since the tear and I am still bleeding a tiny bit. I was able to make it to today’s appointment without incident and was able to see my sweet babe today. I was even luckier that I have been feeling my baby move on rare occasions for the past few days. Through all of this nothing has been more overwhelming than the outpouring of love and concern from those that surround me and my family. We were given calls of encouragement, kind thoughts/prayers, meals, and help with our children. I am so thankful and being an emotional pregnant lady was brought to tears on more than one occasion when I stopped to think of the love that surrounds us. 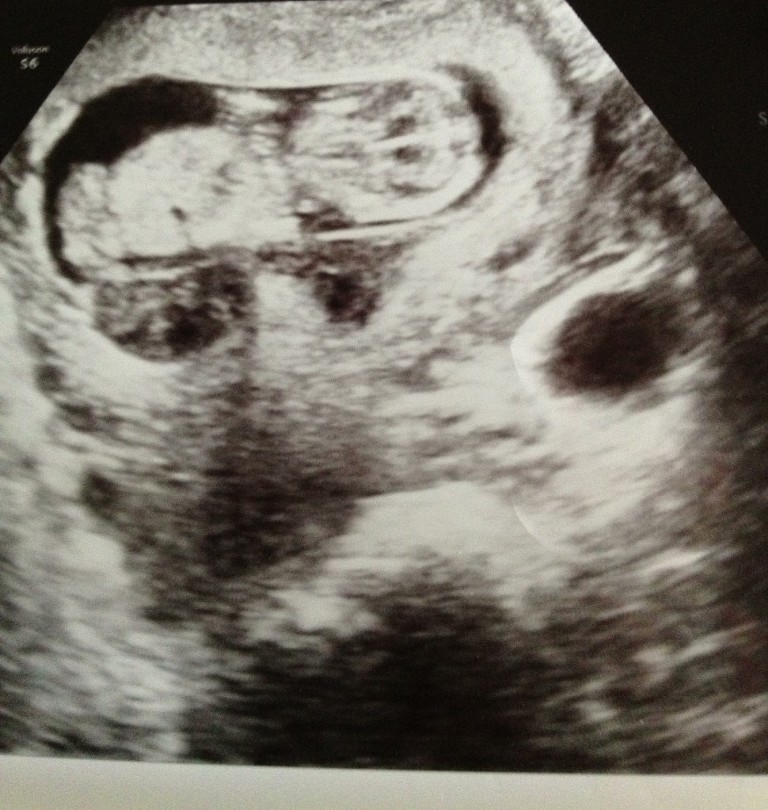 Underneath the baby you can still see the pockets of blood that remain after having healed and resealed and I am praying that it stayed sealed! It is so fun to see this little one grow and it will be joining our family in November! I plan to do updated belly shots (which is somewhat terrifying to me) because this is my third pregnancy and things are already progressing so quickly in the belly zone! ha ha. But I have been blessed because usually I can’t keep anything down and have to be on a few medications to control my nausea. This pregnancy I haven’t taken one thing for it because it hasn’t been that bad! But I have been eating. A lot. Ha ha. Whatever keeps the baby happy, right? I plan to start a regular walking routine and just pray that the rest of the pregnancy will be uneventful. 🙂