Five years ago, we met Jordan for the first time.

If you don’t know Mr. Handsome, he is the big brown eyed, brown haired little boy that strutted into our family and turned it upside down. I can hardly believe it has been five years, and at the same time, it feels like an eternity.

One prayer, one wish was granted when I least expected it. Who would have thought that when I knelt down on the tile floor in my laundry room, that angels were listening? I knew that I had a beautiful family and hands that were overflowing with spunky blonde daughters, but I really wanted a son, too. Tears streamed down my face as I expressed this, and I knew it may never happen. I have prayed before without getting what I wanted and have learned many lessons this way.

Thank goodness, my prayer was answered. I knew it would be hard, but I had NO idea of the impact of this blessing. Being an adoptive mom has pushed me beyond anything I could have imagined. With the trucks, dinosaurs, and legos came extreme tantrums, sleepless nights, and many tears. With the hugs, kisses and snuggles, came screams, sadness and loss. With the addition of a beautiful eighteen month old son, came the grief of wondering if I had done the right thing.

Of course, I always knew I had prayed for this miracle. I understood that there were angels supporting this work from the other side. I felt the immense love that came with Jordan from his biological family, who was grieving his loss. I knew this little angel was walking away from his support system – but I believed we could love it out of him. I was never trying to love bigger or better than his previous life, but I felt like if he was meant to be with us, we could find the way.

In the end, I believe that I was right, but it has taken every amount of patience. We can’t rush feelings and this little boy came with a lot of them. Nothing is wrong with him, of course, he is perfect just the way that he is. I have learned to honor his journey and realize that his emotions are valid. Of course I knew this, but when a child is screaming or hitting their head on the floor – it makes you question everything. No book, or good meaning piece of advice, has been as valuable as prayer. It definitely helps to be educated in a process and to hear other peoples’ experiences and lessons learned, but more than anything we need to be patient with the process, whatever it is, and prayer is the way to do this.

Simple answers have come to me through prayer. Things that I believed change the course of Jordan’s experience with us. Things that other people may look at and scoff. Like the times when he was screaming so loud and long, that I finally decided to keep a spray bottle or cup of water handy, so I could spray it at him. This sounds horrible, but sometimes  it was the only thing that brought him out of a rage situation. I’ve even undressed him and put him in a cool bath – which shocked him into reality.

To the average person visiting our home, this could have looked abusive – but I knew it was the right thing. I also chose to sit by him in “time-out” instead of leaving him there as I had with my other kids. For him, it provided a security that I could tell he needed. It definitely wasn’t because I waned to sit and listen to it.

And for a YEAR, I stayed by his side as he drifted off to sleep. I have every “Jewel” song memorized from her “Lullaby” album, because we listened to it hundreds of times. As I held his sweet little hand, he smashed his body up as close as he could to mine. His nose nestled in my hair, nicely warming my ear. “Ma Ma, Ma Ma?” he would say. Although I wanted to have believed it was for me, I knew he was asking where his Ma Ma went.

Eventually, I knelt by his bedside and held his hand for several months, and later brought in a mattress to lay on. Tears would stream down my cheeks, and I wondered if I had done the right thing. In my haste to become a mother to a little boy, had I inflicted a sadness and perpetual pain? Had I caused more problems by selfishly trying to solve my own?

Soon, after about track five, Jordan would drift off to dream land, and I’d slowly peel his fingers away from mine, and sneak out of his room and into my own, where my husband was laying – wondering the same thing. Had we made the right decision? This made the hard times even harder, because I knew he was supporting me in my need to adopt. The guilt, frustration through challenges, and new hardships of learning to love and support Jordan, also forced Jon and I to look at ourselves in new ways, and of course, brought contention with it.

We already had many challenges to face, with raising our niece for five years – who had been through severe trauma herself, raising my step daughter with another set of parents – which is never easy, and five of our own biological daughters – not to mention or business we were building. We were simply pushing ourselves to the max. Those of us who know us personally, often asked why.

Honestly, they still do. My only answer to them is, “Yes, you’re right. We are crazy.” But what I’ve come to believe, is the crazy is good. Wanting things is good, even things that bring lessons with them. We have a deeper understanding and compassion for kids who are adopted. We have more love for birth moms and their families, that choose to give their kids more – not give them up. We have a little boy that has grown into a handsome little man. He still calls my name… “Ma Ma… ” and I know now that it is for me. Somewhere along the line, he understood that he was blessed with two “Ma Ma’s” We have been very open with him about his story. 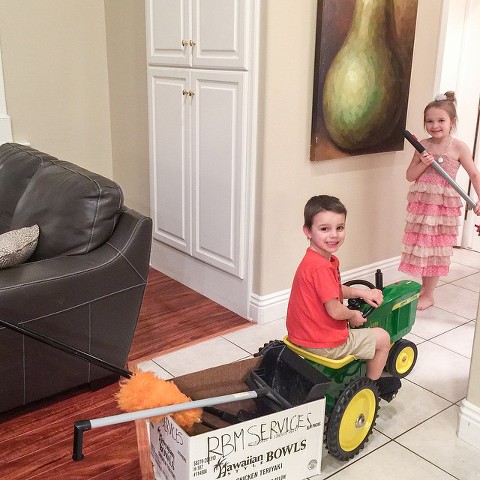 He is so smart and has learned ways to cope with his stress. It doesn’t look perfect, but honestly, who of us can do that? We continue to work with him day to day, to help guide and direct him through his life. School has proven to be another challenge, but he has grown more every year. He has been blessed with teachers that are open to understanding his unique experience. He is reading and writing. He laughs and plays, hugs and wrestles. He serves others, because he wants to. He drives us all crazy with his motorized guttural car noises, policeman outfits, super hero masks and swords – but he is healthy. My daughters have learned what it means to have an annoying brother, and my son has learned what it feels like to have seven mothers, right in his house. I found this awesome sign on his door a few weeks ago! I think all men need a sign like this. 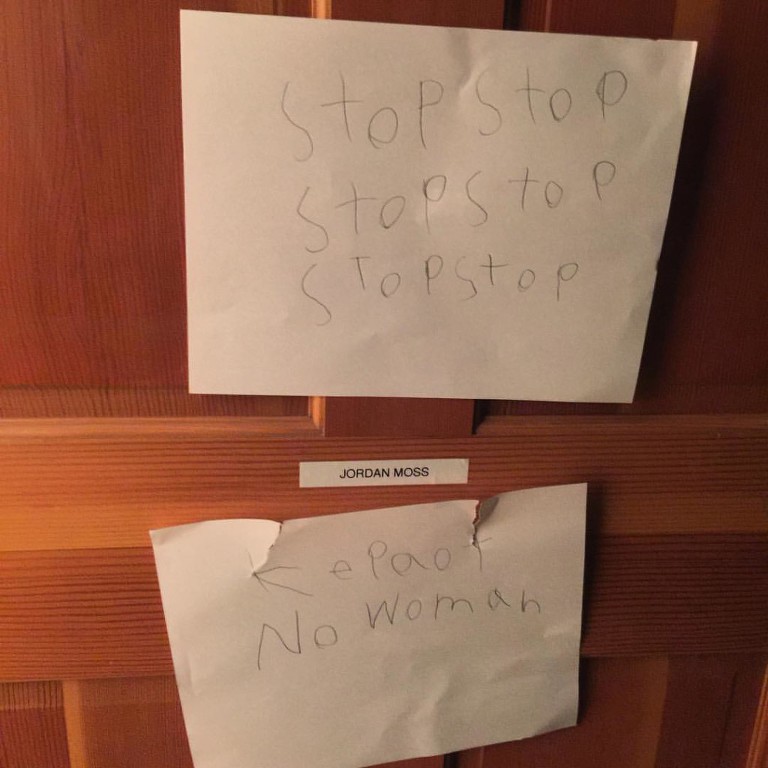 This little angel of ours is loved, and angels helped him find us. Prayer brought us together, and together we will learn. We will find patience through pain and understanding through challenges. It won’t be easy, but it will always be worth it. Blessings don’t always end up looking like we thought they would, and that’s a good thing. How much would we learn if we didn’t face adversity? I am a different person because I’ve been through hard things. The hardest things I would never write on a public blog.

There are people everyday, everywhere, going through unspeakable things. As I have worked in the community, I have been overwhelmed with the vision of resilience I have seen! People make it through horrific experiences everyday, and are better because of them. Some are in them and may never get out, but they still grow and learn and the people around them, supporting them, grow and learn. Together, we build communities that rely on one another. I recently saw this quote, and loved it so much. 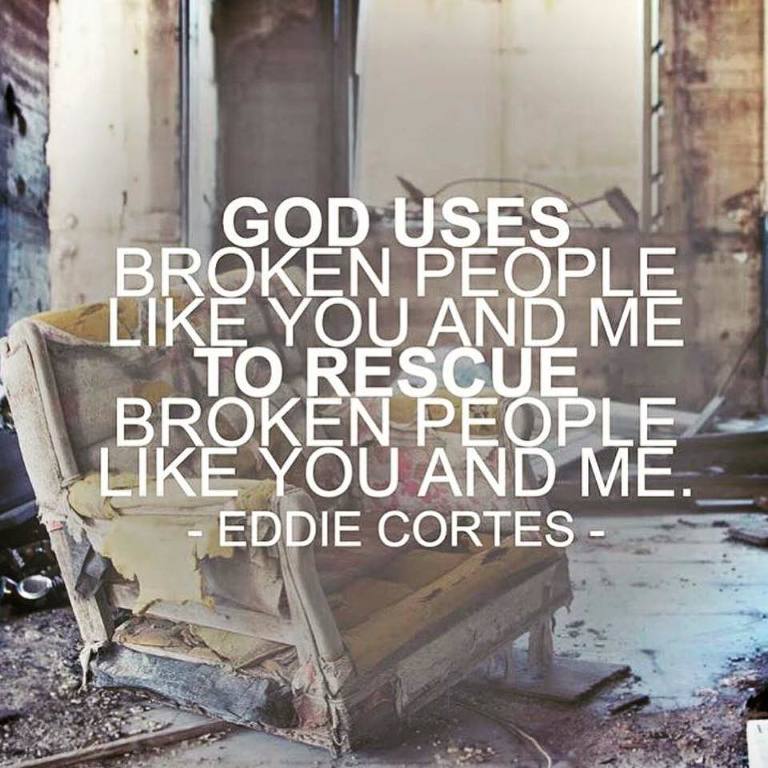 And as you can see, Jordan knows who he is. He even made these labels for everyone in the house – without my help, or permission- I’m convinced he will be okay. Love helps us through anything we could ever imagine. Giving the gift of patience to those we love, will help transform them and carry each of us through challenges. This is life…this is love. 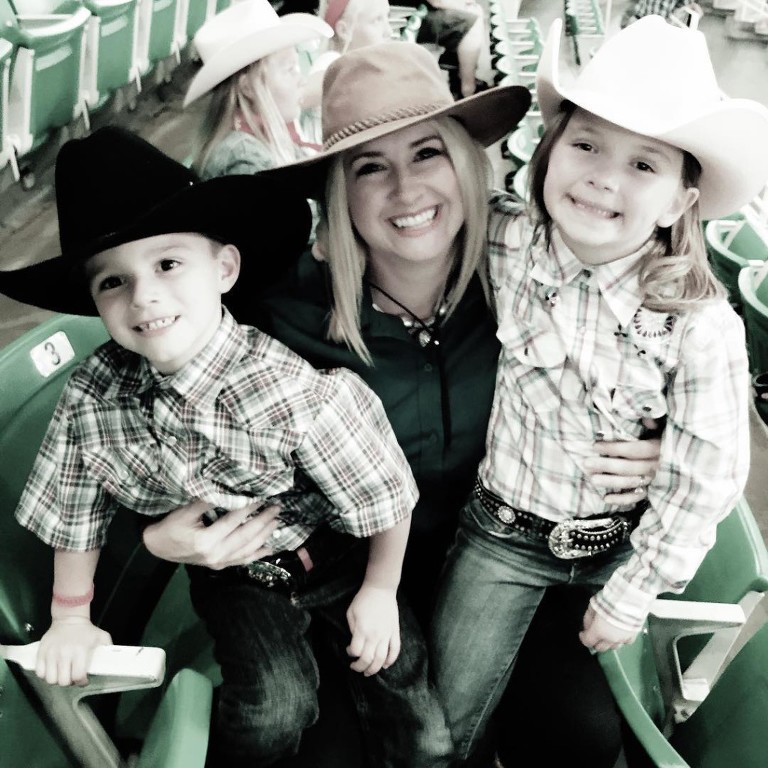 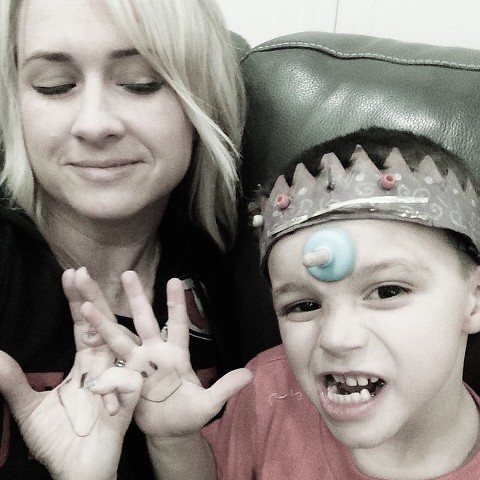 Yes. Both my husband and my son were adopted… “Lost and Found”. And what a blessing they have been in my life! 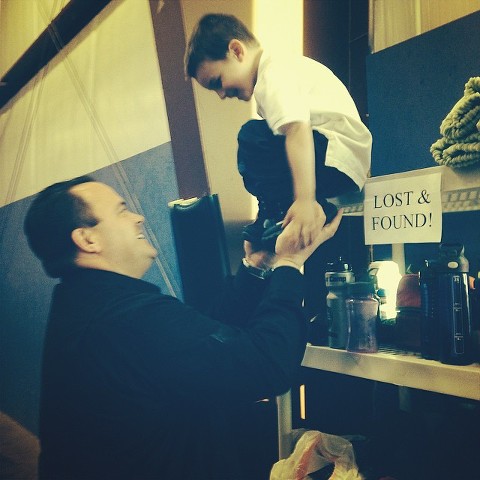 Cheers to 5 Years, and many more to come! If you want to read the full adoption story, you can find it here…(Click Below)

And if you want to read about our story from the birth mom and nana’s perspective, you can find it here.

Adopting a Toddler: Part One

The Other Side of Adoption: Part One

0 comments
« Why a Little Negativity is Actually Good For You
The Other Side of Adoption: Part One »