10 Tips for Raising a Teenage Daughter

Raising kids at any stage is difficult and you can find yourself questioning everything. Here are 10 tips for raising teenage daughters from someone who has been there. 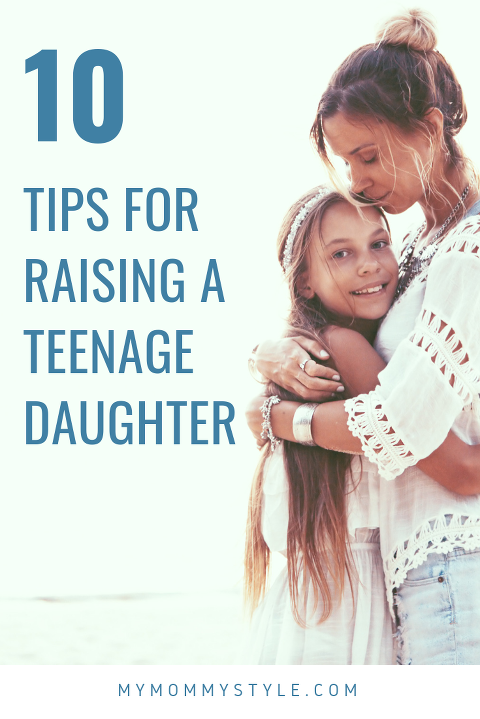 A few weeks ago, I was really frustrated with one of my teenage daughters. She was having difficulties with her friends at school, and her stress was spilling over into her attitude at home. I tried to engage her in conversation, and possibly be a listening ear, but in my frustration with her indifference to me, I kept asking what I should be doing better and what advice she would give me if our roles were reversed so that we could effectively communicate. And then she let me have it.

“MOM!” she hollered, “You’re trying too hard to be a perfect mom to a teenager. And that’s impossible! I’m a teenager. It’s how WE ARE.”

She was right. I was trying to mother her in a way that would temper her essential teenager-ness. I was trying to be the ibuprofen to dull her pain–and mine. The truth is, you can try your very best as a parent, and still it may not fix everything. Your teenage daughter will still be in the thick of her life, driving you absolutely crazy along the way.

I’ve often wished that parents blogged as much about raising teenage girls as they do about caring for young children. After all, adolescence is a three-ring circus, from the dating, to the hormones, to the fights, to the curfews. But I understand why bloggers go silent when their kids become teenagers. The glorious mess of being a parent to a teenager is different from the sweet chaos of young children. When you are surrounded by little ones, you have this urge to connect with other adults because your cuddly baby can’t give you any kind of adult conversation. As your kids grow, you have many more chances to use every bit of your language–and you do.

The irony is that these days I end up sounding like a teenager far more often than I’d like. My emotions can run as hot as theirs, especially when I’m fighting with myself about the right course of action in any given situation. In all honesty, usually I’m fighting against myself more than with my teen, or battling to get on the same page with my spouse about how we deal with this or that problem. Who has time to blog about this stuff? It’s just plain hard.

That said, I know from long experience that we are all stronger as parents when we share our experiences, and I’ve picked up a few morsels of wisdom as my daughters (all 6 of them!) have made their way through adolescence. These ten tips help me love and support my daughters as they are–and hang onto my cool. I hope they can do the same for you.

10 tips for raising a teenage daughter:

1. Remember that a teenage brain is not a fully developed brain. Scientists used to think the brain was pretty well developed by age 10, but it’s not. To begin with, the frontal lobes of the brain are not fully connected until you’re in your early 20s. Really. And this is the part of the brain that helps us decide if something is a good or bad idea, and what the consequences of an action may be.

2. Know that your teen is not as maddeningly self-centered as she seems. It’s easy to think of teens as fundamentally rude and self-centered, but this behavior is actually the developmental stage they are at. They aren’t yet at a place of thinking about the effects of their behavior on other people. This would require insight–and insight requires a fully connected frontal lobe. This doesn’t mean that you stop trying to help them develop greater insight and empathy. It just means you try to be a little more understanding .

3. Understand that teenagers want, more than anything, to be accepted by their peers. Truly, these amazing goofballs live and die by pleasing their classmates. I remember doing this myself. When you’re in high school, that experience IS your world. Now that I’m older, I can so easily see how high school was a small part of my life,  but at the time such perspective doesn’t exist. When I downplay the significance of a situation bugging my daughters, it only makes it worse for them (and me). But when I try to put myself in their shoes, we walk better together. Beefing up your own empathy helps a lot. Try to imagine someone spreading rumors about you, or the humiliation of getting a bad grade (even it’s your own fault because you you forgot to do your homework).

4. Compliment your daughter until you’re blue in the face. I am far more worried about my daughters feeling like they aren’t good enough than giving them an inflated ego. I’ve heard several parents say they won’t talk about all the good in their kids because they don’t want them to be stuck up. I couldn’t disagree more! The world will be plenty rough on your child’s self esteem. Mom and Dad are there to support kids, not tear them down.

5. Let them experiment with their look. Okay, I know there are boundaries here, but I believe there are times–even a lot of times–you can go easy. I’ll let you decide what that means to you, but in my opinion, the teenage years are about finding yourself. If you continue to love them despite their outward appearance, your child will feel accepted. She’ll understand that you are proud of her, no matter what. Beyond that, experimenting with appearance helps teens establish their identity and independence.

6. Invite their friends to dinner. You’ll have a better idea of who your kids are hanging around when those friends come to your house. Get to know them and see how they interact. This way, as your teenager works through things happening at school, you’ll know the relationships at play and be able to offer more useful feedback. When I know who my kids are talking about, they open up a lot more and vent about whatever has come up.

7. Keep the conversation open. Try to make conversation with your teen. They may not answer all of your questions, and that’s okay. Share some funny or interesting things that happened in your life–and leave the door open. Sometimes it’s easy to get mad at your teens for not opening up more, even though there are days you wouldn’t want to open up and talk about all of your problems either. Be a listening ear. If they feel heard, they will talk when they are ready. If a conversation isn’t happening, try writing a letter.

8. Be a role model. Ralph Waldo Emerson wrote, “Who you are speaks so loudly, I can’t hear what you’re saying.” If you strive to be compassionate, understanding, patient, strong, smart, and all of those other great things, your teenager will pick up on it. It may not seem like anything’s getting through at the time, but eventually she’ll come around.

9. Accept that sometimes you aren’t the best messenger. Kids get used to their parents talking all the time. It’s easy for them to tune you out, or not believe you, simply because you are the parent. Keep a mental list of other influential people in your daughter’s life who can serve as the right messengers at the right time. Think aunt, sister, grandma, friend, one of her friend’s parents or even a book or movie that conveys a message they need to hear. Try not to be offended by playing second banana. Parenting is a team effort.

10. Be real. Apologize when you’ve done something wrong. How can you expect your kids to look at their imperfections if you won’t be honest about your own? Talk about your teenage years and the things you went through, such as break-ups and bad choices. Share that there is a light at the end of the tunnel, and even through you are old as a dinosaur, you understand what she’s going through.

And one last tip, because we need all the help we can get as parents to teens: Treat yourself well. Go buy a box of chocolate or munch a bag of kale chips and sit down to  your favorite movie, with the understanding and comfort that someday, hopefully, your teenager will know the immense blessing of raising her own darling daughter.

Tips For Raising Your Teenager