Since the Superbowl is tomorrow I thought it would be fun to share a story I wrote on my private family blog back in 2009. It is my favorite Superbowl of all time and I know I won’t ever forget it because I have a scar on my left foot to remind me!

In the New York Giants playbook, there is a play called the 76 Union Y Sail. It is the play that put me in the emergency room one year ago. It is the reason I had to get stitches in my foot. It is one of the reasons why I love football.

The day was Sunday February 3, 2008. It was the day of Superbowl XLII. I was home alone with Jordan because Benji was flying home from Chicago after spending the weekend at an ASDA (American Student Dental Association) conference. I put Jordan down to sleep early because the poor boy was so sick. He had a slight fever, runny nose, cough, etc. I got a few pictures of us hanging out before putting him to sleep, but you can definitely tell he wasn’t up to watching football with his crazy mom. 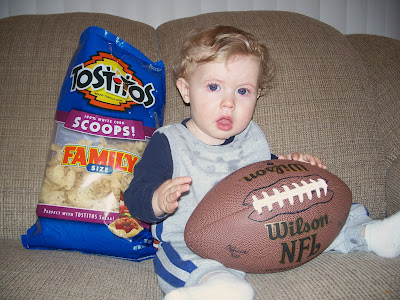 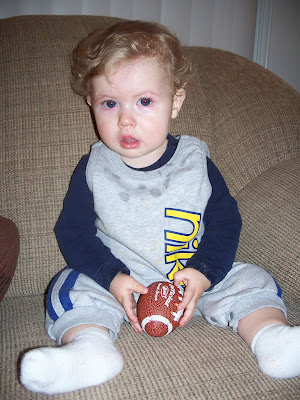 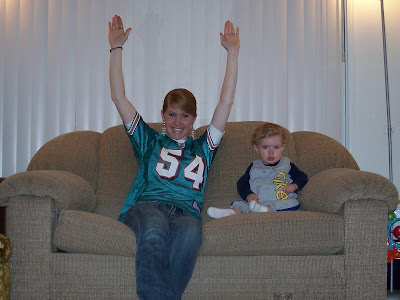 I desperately wanted the Giants to win. It’s childish but, I hate the Patriots, and didn’t want them to have the satisfaction of having an undefeated season. I was cheering rather loudly for the Giants and it made me giggle because I was all alone. Then came the Giants last drive of the game. There was two and a half minutes left, the Giants were down by 4. They had to score a touchdown to win and they had a daunting 83 yards to push through to make it the end zone. Things didn’t look good for the Giants. They had a few great plays to get them going, which included a fourth down conversion to keep the drive alive. Then on their own 44 yard line the Giants called the play that would seal my doom. On third down Manning pulled away from at least four Patriots and a near-sack to throw the ball 32-yards to David Tyree, who caught the ball one handed against his helmet as he fell to the ground. It put the Giants in Patriots territory, and set them up for a Manning/Burress touchdown for the win.

I realize most of you will have no idea what I just said, all that matters is it was the best Superbowl play I have ever seen and caused me jump and cheer. So once again I felt so silly making such a raucous by myself that I had to set up the camera to get a picture of my celebration. I put the camera on the self-timer setting and started cheering and jumping in front of the camera waiting for the flash. As I was doing that I jumped on the glass I had been drinking out of, which happened to be on the floor because I didn’t want it in the picture! So, I crashed on the glass, and I knew it was broken, and knew that I was injured, but my camera still hadn’t taken the picture, so I took the time to jump one last time in the air for picture’s sake, and then stopped to check my foot. 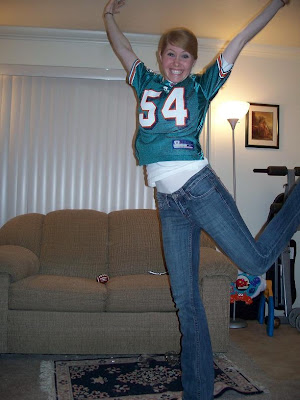 I don’t believe I have ever made that face in any other picture before. I’m worried and in pain, but trying to look happy. It’s not a good look. (If you look closely in this picture you can see the broken glass all over the rug.)

There is an awful feeling that comes with being all alone with a bleeding foot and not knowing what to do, or knowing whether the cut is deep enough or bad enough for medical care. I only knew there was lots of blood, I didn’t dare inspect the wound any more than that. I had absolutely no idea what to do, so first things first I had to call my friend and see if she could pick up our husbands from the airport for me. Then I had to find a way to get to the ER. I called my wonderful neighbor and friend who picked me up, gave me a piggy back ride to her car, took me to the hospital, and then took my poor sick child back to her house to care for him. His fever had worsened by quite a bit, he was burning up with a temperature of 103! I felt so bad, but was so grateful for the help! I was stuck in the waiting room for a few hours and then finally was stitched up, given a tetanus shot and sent on my way. Luckily, Benji made it to the hospital before I had to get the stitches, so I had a good, familiar hand to squeeze and I had a ride home.

So there it is. I now have a Superbowl scar on my foot, but the Giants won, so it was worth it. I’m also so blessed I wasn’t injured any more than I was. When I got home and finally cleaned up the glass, I was shocked to find how jagged and sharp the glass looked. I have no idea why I’m smiling in this picture because things could have definitely been worse…. 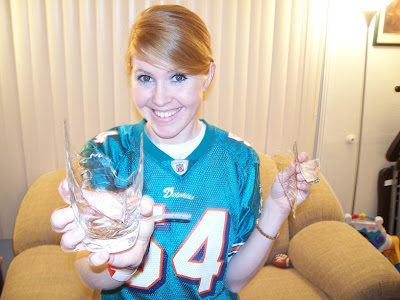 ……the Patriots could have won.
Camille

Tips for having a family friendly turkey bowl