An Inventor Lives in your House, Ways to Encourage your child’s Creativity 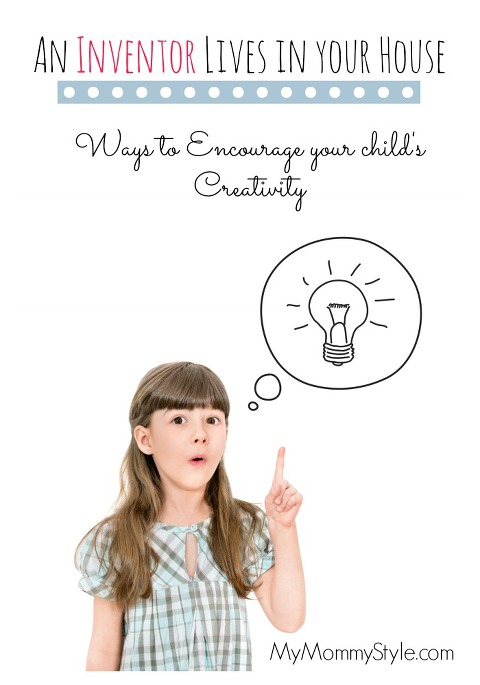 Did you know that most of the world’s greatest inventions have come because someone wanted to make life easier? Most inventors don’t set out to invent something awesome, rather they set out to solve a problem.

One of the most useful lifelong skills a child can develop is the ability to solve problems. The process of inventing is one really fun way to get your child more involved in problem solving. This summer is the perfect time to get your kids excited about problem solving and inventing.

Ask your child the following questions to get the process started:

What can you create to make playing with your toys more fun?

Can you think of a new toy you can make?

What would make your chores easier?

What problem could you fix by making something new?

Encourage your child to focus on problems they can solve and inventions that they can actually try to make. For example, building stadium lighting in your backyard so that your kids can play outside all night long is not a project a child can complete. Building a zip line for action figures is a much more realistic goal.

Solving problems often takes time and requires testing out a lot of options. Coming up with the best answers often means encountering some failure along the way. Reassure your child that making, testing, fixing, and even starting over are all important parts of the inventing process. Offer simple helpful tips when you child gets stuck, but constantly encourage them to solve their own inventing problems.

Here are some really cool stories about inventing that you can share with your kids to get them inspired:

Chelsea Lannon was in kindergarten when she got an idea while helping her mother with her baby brother. Her idea led to the invention of the pocket diaper (a diaper with a pocket that holds a wet wipe and small powder puff). Chelsea received the patent for the pocket diaper in 1994 at the age of eight.

Chester Greenwood was 15 years old when he invented earmuffs. Chester was frustrated that his ears got cold while ice skating and discovered that wrapping a scarf around his head was too itchy. Chester received the patent for his invention and went on to obtain over 100 other patents.

In 1962, 5 year old Robert Patch used some shoe boxes, bottle caps, and nails to make a toy truck. The parts could be taken apart and put together as different types of trucks. A year later, Robert became the youngest American to be awarded a patent.

Cassidy Goldstein was working on an art project when she was 11 years old. She realized all of the crayons in her box were broken. Before long, she came up with the idea for crayon holders, an invention that allows children to hold crayons easily even when they break. Cassidy received a patent at age 12.

As you may have noticed, all of these young inventors secured patents for their inventions. If your child comes up with a truly great idea, they will need your help in pursuing a patent. Click here for more information on patents.

Inventing something new doesn’t necessarily have to be a new object or tool.

Here are some other ways you can get your kids inventing this summer:

Let them make up their own recipe

Have them make up their own song

Ask them to write a story

Give them art supplies and see what they create

Ask them how they could spice up an article of clothing

Let them make their own musical instruments out of household items

Use these tips and get your kids excited about inventing this summer. You never know what your children are capable of creating until you give them the opportunity to experiment with problem solving. A future patent holder could very well be sleeping under your roof!

The best developmental toys for kids

7 Ways to Teach your Kids How to Share & Giveaway!