How to set up the perfect treasure hunt

As a kid, one of my very favorite party activities was a treasure hunt. We did it frequently in my family, for birthdays and special presents. With a little bit of creativity, it can be an activity that no one will ever forget. If you have a group of kids, it’s a great way to encourage them to problem-solve together, puzzling out clues, spreading out to search faster, and working as a group in order to obtain the prize. Additionally, if you’re doing it as a family activity and you have a mix of ages and abilities, it’s pretty easy to add little challenges along the way that will give each member of the group a time to shine. For more party game ideas check out this post. 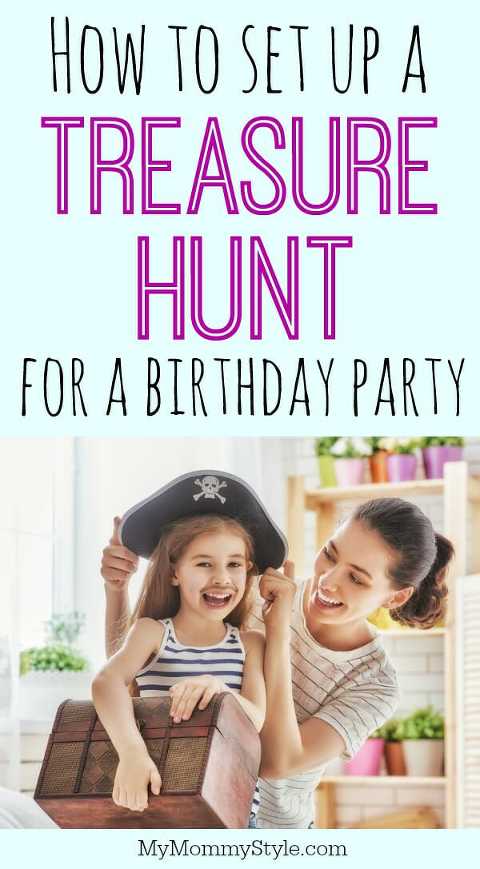 How to set up the perfect treasure hunt

The most fun thing about a treasure hunt is the clues. Somehow, they tend to feel just a little more special when they’re in rhyming couplets. Don’t worry! No one will care if your poetic leanings are less-than-stellar. Hints can be as simple as: “When it’s morning and your mouth tastes like mush/This is the place you go to brush” and the treasure hunters will gleefully run to the bathroom vanity.

If you are dealing with an older group of kids, you might think about making the clues a little harder to get. Of course, it’s always hard to tell what it is that will stump a group. What seems obvious to you might actually be nearly impossible. For this reason, I think it’s always a good idea to run the clues by someone else in order to test them. Additionally, you might grant the treasure hunters one additional clue during the game, wherein they can ask you for another hint if they’re feeling stumped. This way, they’re going to be more picky about when they actually ask for help, but they’re not stuck on one clue until it stops being fun.

Another way to do a treasure hunt is with maps. If you’re more gifted on the visual end of the artistic spectrum than you are towards the literary one, one large map that will lead searchers to the treasure, or small ones along the way can be really fun.

You can pair maps with clues (like 10 paces south) in order to make it feel more authentic to the kids. You can also have pieces of the map scattered in different hiding places so that participants are gradually gathering the pieces of the puzzle that they need to find the final location. In any case, it will make the fun extend a lot more if you have a series of clues that build on each other, rather than just one big search.

One thing that you’ll have to make sure you establish with the players before you begin is where the boundaries are. After all, you don’t want your neighbors getting peeved because little boys are digging up their back yard, thinking that there might be treasure or a clue there. If you have participants who aren’t as familiar with the property, make sure that you find a specific way to designate the boundaries, either permanently, or temporarily. Also take note of which rooms are out of bounds. For example, if you have a teenager who doesn’t want to be part of it, or you don’t want children rummaging in your own private bathroom, you’d best let that be known before the fun begins.

If the search is extensive, or if you’re working with children who might have a shorter attention span, you might think about including mini prizes along the way. This gives participants that little pep of victory so that they feel more encouraged to continue. It also means that if you decide to divide people into groups and have them compete against each other, you’ll probably end up with more than one winner because some will win the grand prize, and others will win little prizes along the way.

As mentioned above, special challenges along the way give all of the players the chance to contribute. You’ll probably find that just one or two people are getting the majority of the clues. However, others can help in fetching items from hard-to-reach places, singing a song that has an important clue within its lyrics, etc. You might even add checkpoints along the way wherein a clue is actually hidden with another person, and that person gets to demand a challenge before they surrender the clue (i.e. I want someone to perform 5 cartwheels.)

Have a Place to Watch

While the searchers run from place to place, you’ll want to have a great view of all the action. If you have other parents attending the party, you’ll especially want to make sure that you can sit back and watch the madness in a place that the children know where to find. This place might be a nice deck or porch.

42 of our favorite organizational products + a giveaway