How to get out of a speeding ticket.

How to get out of a speeding ticket: Cassie Style 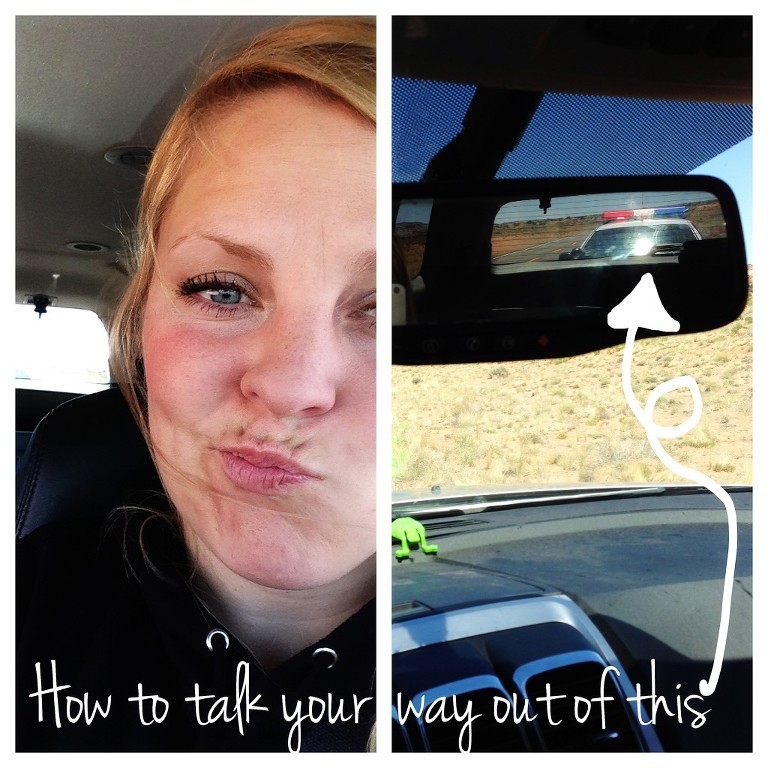 Let’s be honest, even the best of you little church-going folk have had 4-letter words flash through your mind when this happens to you.  Like “Holy flip!” or something like that, right?  I thought so.  As one who has found myself in this situation on more times than I can count on one hand…or two…possibly four…okay, yeah, pretty darn close to four hands, I consider myself an expert on the matter.  In fact, I even wrote a paper on this in a Persuasion class in college; I aced it….though I’m not sure that I should brag about that considering why I aced it.

First of all you should know that there is a street in my hometown that is pretty much the fastest route to everywhere (Mutton Hollow for all my K-town friends), except for that pesky little thing called a speed limit, which is 25, thus making it ridiculously slow.  I genuinely don’t know a soul who drives down that road that slow except for bikers, and maybe not even them!  So one Sunday afternoon as I was cruising down this street at a breezy 50 miles an hour (only double the speed limit, no big deal) I found myself looking directly into the red lights of a scanner, which held at the end of it, a not-so-pleased man in blue.  I actually pulled over before he could even tell me to.  Now at this point, I should mention that I drove a pretty sweet car; a 1992 green Geo Metro!  It was kind of awesome; basically a glorified tin can on wheels.  I always meant to install a convertible top, but I didn’t own a can opener at the time.

The cop walked over to me and said, “Do you know what the speed limit is on this road?”

The cop then followed with, “Do you care to take a guess at how fast you were going when I clocked you?”

So, I opted for the ridiculous and said completely deadpan, “100?”

The cop looked my little tin can up and down and with a rather confused look on his face said, “Can this car go 100 miles an hour??”

To which replied without missing a beat, “Not even falling off a cliff!!”

He began to laugh…and I mean REALLY laugh!   Like, I was scared of what was going to happen, but then after he had a minute to calm down he said, “I shouldn’t be doing this, but it’s been a REALLY LONG day and I needed that, but also, I’ve pulled over nearly 30 people this afternoon, and not one of them could tell me the speed limit on this road, and when I got their licenses I could see that almost everyone of them lived on or very near this road.  So, you better get out of here before I change my mind.”

And that was that!

I could pepper you with many more funny anecdotes of me getting pulled over in that car, but suffice to say, it saved my little hiney more than a few times…and then I learned a few tricks along the way.  (also, I interviewed the Ogden Chief of Police for my college paper on the matter, so they’re legit.)

How to get out of a speeding ticket: Gangnam Style, no wait, I mean, normal people style.

There are 3 steps, and you must follow ALL of them; hopefully it works as well for you as it has for me (in fact, TWICE in the last 2 weeks!! Oops!)

Turn off your righteous indignation and anger, and for the love, turn off the urge to cry!  9 times out of 10 it will NOT help you and they’ll see it as manipulative…but maybe if you’re a man it will shock the officer enough to feel charitable; let me know how that works for you!

2.    Place your hands at 10 and 2 on your steering wheel, turn on your interior lights and take off any hats and/or sunglasses.

You want to put the officer completely at ease. NEVER get out of your car.  Just remember, this person is just trying to do their job and they deal with enough crap already, so take any unnecessary tension out of the equation.  Make sure everything is ready to go before he gets up to your window and just be polite and do what the nice man with a big gun says. Save your pleas until after the basics are through.

3.    Be honest, apologize, and be self degrading.

Here’s my own example from last week (hence, the photo at the top), mind you, I was going 20 over, and I drove off with nothing more than a verbal warning;

“Officer, I’m really sorry.  I knew better than to pass that suburban.  Ugh, that was so stupid of me.”

First of all, even when you think you’re giving a great excuse, everyone knows it’s still just an excuse. True or not, we’re all just rolling our eyes waiting for you to get done telling it, however dramatically.  Plus, if you just admit you’re wrong, it’s likely to give the officer a breath of fresh air.  Second, cops generally just want you to stop the behavior.  Believe it or not, they want the roads to be a little safer so they can get home a little earlier.  So reassuring them that you do know better conveys that you’re generally a good person who doesn’t behave this way often (even if you do).  And third, it’s somehow in our nature to want to stop you from being so self-critical and give you a pat on the back.  I don’t know why. That’s why it’s almost impossible not to tell your size zero friend how skinny she is when she cries about being fat, even though you’d rather punch her in the boob for fishing for that compliment in the first place.

And there you have it, my VERY tried and true method for getting out of a speeding ticket.  I hope you don’t have to use it, but when the words, “Holy flip” are running through your head as you see the flashing blue lights of death in your rear view mirror, give this a try!

5 Tips for Creating your own Family Theater Night

The Best Things to do in Boston, Massachusetts